The 2019 exhibition of artefacts and memorabilia belonging to J. W. Singer and his family was part of the “Casting The World”, project which incorporated exhibitions, events and a publication throughout 2019, exploring the life and work of John Webb Singer, who was born in Frome on 23rd February 1819.

Frome Museum has a collection of over 3,000 glass negatives from the Singer Art Metal Factory.  They give a fascinating insight to the work of this Frome based industry.  The negatives formed the basis of the ‘Casting the World’ exhibition, a Heritage Lottery-funded project led by Rook Lane Arts Trust, along with key partners  Frome Heritage Museum.  The project is also supported by the Frome Society for Local Study,  Frome Town Council, Frome Festival, Home in Frome, Black Swan Arts, Frome Learning Partnership and Johnson’s Controls.  It explored and celebrated the life and work of John Webb Singer, founder of J. W. Singer & Sons foundry, a pioneering example of Victorian industry from the mid 19th century onwards.

Founded in 1848 J. W. Singer & Sons started out with a small forge on Eagle Lane, but grew to become one of Frome’s major employers and was responsible for producing some of the world’s most iconic public statues, including Boudica on the Thames Embankment in London, Justice that crowns the Old Bailey and the lions at the Rhodes memorial in Capetown, South Africa.

Sue Bucklow has been researching and studying Singer’s life and work since 2001 and has discovered a number of previously unseen images of the foundry at work in surviving glass negatives, as well as correspondence and family photographs.  Sue was excited to be able to share her research in an  exhibition which was held at Rook Lane Arts in July 2019.

Sue said, “The history of John Webb Singer and all that he did for Frome is truly fascinating.  Setting up a foundry that employed hundreds of local people, working with the top sculptors of the day, casting statues that were sent all over the world, as well as establishing the Frome Art School are just a few of the stories we’ll be highlighting during the Rook Lane Arts project.”

On Saturday 23rd February 2019 Sue led visitors on Frome Town Council’s inaugural Singer’s Heritage Trail, a tour of sites around Frome associated with John Webb Singer.  This took in elements of the former J. W. Singer & Sons town centre foundry at Waterloo, which once employed more than 700 people. The Singer’s Heritage Trail can be experienced at any time.  Pick up a leaflet in Discover Frome, Frome Heritage Museum or download it from the Frome Town Council website.

If you would like to be involved in the project email 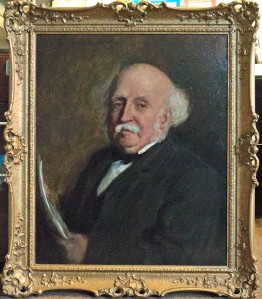